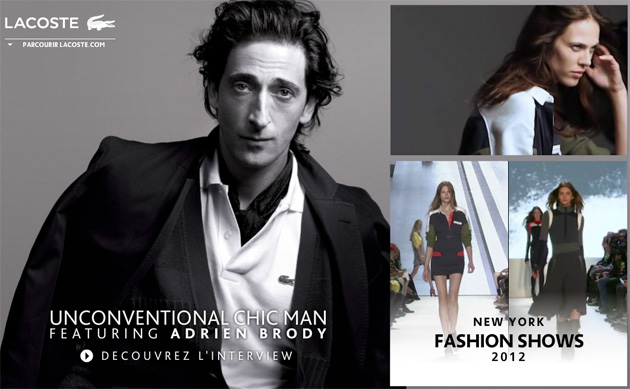 Lacoste is a French apparel company founded in 1933 that sells high-end clothing, footwear, perfume, leather goods, watches, eyewear, and most famously tennis shirts. In recent years, Lacoste has introduced a home line of sheeting and towels. The company can be recognized by its green crocodile logo.

Lacoste History René Lacoste founded La Chemise Lacoste in 1933 with André Gillier, the owner and president of the largest French knitwear manufacturing firm at the time. They began to produce the revolutionary tennis shirt Lacoste had designed and worn on the tennis courts with the crocodile logo embroidered on the chest. Although the company claims this as the first example of a brand name appearing on the outside of an article of clothing, the “Jantzen girl” logo appeared on the outside of Jantzen Knitting Mills’ swimsuits as early as 1921.

In addition to tennis shirts, Lacoste produced shirts for golf and sailing. In 1951, the company began to expand as it branched from “tennis white” and introduced color shirts. In 1952, the shirts were exported to the United States and advertised as “the status symbol of the competent sportsman,” influencing the clothing choices of the upper-class. Lacoste was sold at Brooks Brothers until the late 1960s. It is still one of the most popular brands in the United States, sporting the “preppy wardrobe”.