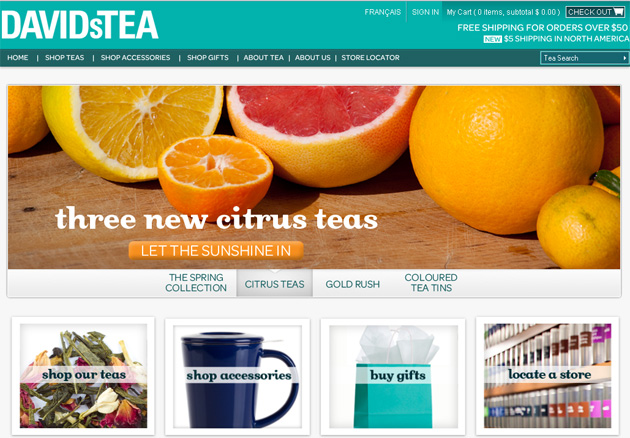 At DAVIDsTEA, we love bringing you the greatest loose-leaf teas and ingredients from around the world. Our teas range from traditional straight teas to our exclusive blends and unique flavours. Our ongoing quest for the highest quality and most innovative blends doesn’t stop with tea leaves—we seek out the best spices, fruits, nuts, and herbs from every corner of the world. Our teas are fun, but our dedication is serious!

Tea is everywhere and has been for nearly 5000 years. It’s in almost every country and every culture around the world. Wars have been fought over tea, empires built and lives changed.

Fast forward to 2008. Meet David. (Yes, there really is a David.) Throughout his 20s, David wondered why he couldn’t get a decent cup of tea. He thought tea was too serious. He wondered, why can’t tea be more fun? DAVIDsTEA started in Montreal and opened its first store on Queen Street in Toronto, Canada. Before long, first time customers became regulars and our neighbours became our friends. And the same thing has happened at every new store since. Today you can find DAVIDsTEA locations in neighborhoods and communities across Canada and the United States. Plus, we have grown our online business to make sure you can always get your fix, even if you can’t make it to a store.

We have traveled the world sourcing premium loose leaf teas, creating exclusive blends, and offering crazy stuff like matcha lattes and tea martini kits…not to mention ramping up our offering of organics, recyclable packaging, composting and other sustainable practices.